CREW Detroit presented the Woman of Impact Award to Catherine M. DeDecker, PS, Vice President/Marketing Manager of Spalding DeDecker. Selected by the board, CREW Detroit’s Woman of Impact is someone who demonstrates a sincere commitment to the commercial real estate industry, has been an advocate for women in the industry, and is an organization member of long-standing tenure.

DeDecker joined CREW Detroit in 2003, and is currently active with CREW Detroit’s Outreach Committee, CREW Careers, and UCREW, and most recently served as the 2015/2016 Outreach Director. She began her career over 32 years ago as a survey “rodman” and held several positions before becoming a Vice President in 2006 and the Marketing Manager in 2007. Her kind, brave, generous woman spirit inspires those around her to be the same.

Selected from 17 entries, the real estate developments presented with the 2017 Impact Awards were:

The Foundation Hotel
Category: Adaptive Reuse/Renovation; Submitted by: McIntosh Poris Associates
The architects worked with Aparium Hotel Group to repurpose the former Detroit Fire Department Headquarters and adjacent building, previously known as the Pontchartrain Wine Cellars, into a boutique hotel. Together, the two historically registered buildings accommodate 100 hotel rooms, office/conference spaces, Detroit-focused retail, and a fitness center. The boutique hotel features a ground-level restaurant/lounge and a roof-top banquet space housed in a new addition. The $28-million project embraces a “Detroit State of Mind” to welcome both visitors and locals with an authentic sense of place.

City Hall Artspace Lofts
Category: Special Impact; Submitted by: Neumann/Smith Architecture
Looking to use the power of the arts to improve East Dearborn’s economic base, the East Dearborn Downtown Development Authority invited Artspace into the community to acquire the 90 year old City Hall complex to repurpose as a residential artist community. Artspace, the nation’s leading developer of artist led community transformation, decided to move forward with their first Michigan project to add to their impressive resume’ of nearly 50 properties in 30 different communities across the nation. 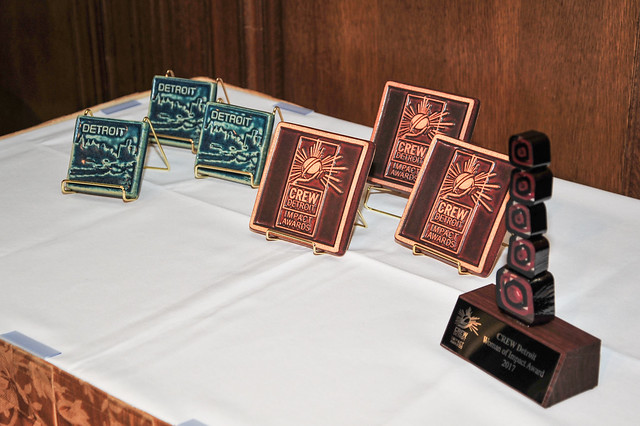 As further tribute to the organization’s commitment to cultivating influence throughout the region, the CREW Detroit Board of Directors presents one deserving member with the Woman of Impact Award, nominated by the CREW Detroit board.

About CREW Detroit:
Founded in 1986, CREW Detroit is a founding chapter of Commercial Real Estate Women Network, the premier professional organization dedicated to advancing women’s success in commercial real estate. We are an organization comprised of more than 175 professional women within a growing national network of over 10,000 CREW Network members in 70+ chapters across the United States and Canada. Members of CREW represent every discipline in the commercial real estate industry including architects, attorneys, brokers, contractors, designers, developers, engineers, lenders, title agents and many others.

On both the national and chapter levels, CREW presents programs and events that promote educational and business opportunities to its members: